Article published on October 26 /2017 in the Selkirk Record:

The Winnipeg Humane Society is offering free veterinary consultations to new pet owners. The Welcome Home Program aims to connect all Humane Society adopted pets with a local veterinarian at the time of adoption. Upon adoption, the Humane Society will provide a list of clinics which will offer a free consultation, which is available for the first four weeks of adoption. Kyle Jahns, the Winnipeg HumaneSociety (WHS) communications coordinator, said that this program was created because a lot of new pet owners were calling the WHS with any problems their pets had, instead of going to a vet.“One thing we realized there was a need for was to connect our adopters with some vet care,” Jahns said. “What we had found was we were receiving calls from people about issues with their pets. They were calling us because they didn’t know what to do. “Our clinic is not set up to provide that sort of help.”Jahns said people don’t go through their entire lives without visiting a doctor or dentist, and pets are the same. Animals require check ups to make sure that they live long and healthy lives. Dr. Jennifer Sletmoen, a veterinarian working at the Selkirk Animal Hospital, said that pets require consistent monitoring, so that vets can catch any health problems early on. “It allows us to constantly monitor a patient, catch things early,” Sletmoen said. “If there’s anything that’s just starting to develop in an animal, we can catch it early and do more for them … Not only do we do a full head-to-toe examination, but we’re addressing any behavioral concerns, diet concerns, any questions that a pet owner might have.”Sletmoen said that the most common illnesses they deal with are heartworms and lyme disease. These illnesses are hard to recognize without a proper examination, and if a vet catches it early, there are plenty of options to treat and prevent them. Jahns said that going to a vet can not only save a pet’s life, but also save it’s owner a lot of expense. “If people ignore these issues, what could be addressed in a routine checkup worth a little bit of money, could turn into a vet bill that will cost thousands of dollars in surgery.” The WHS adopts more than 4,000 pets to Manitobans every year. Almost 30 clinics have signed up with the program.To find out more information, visit winnipeghumanesociety.ca. 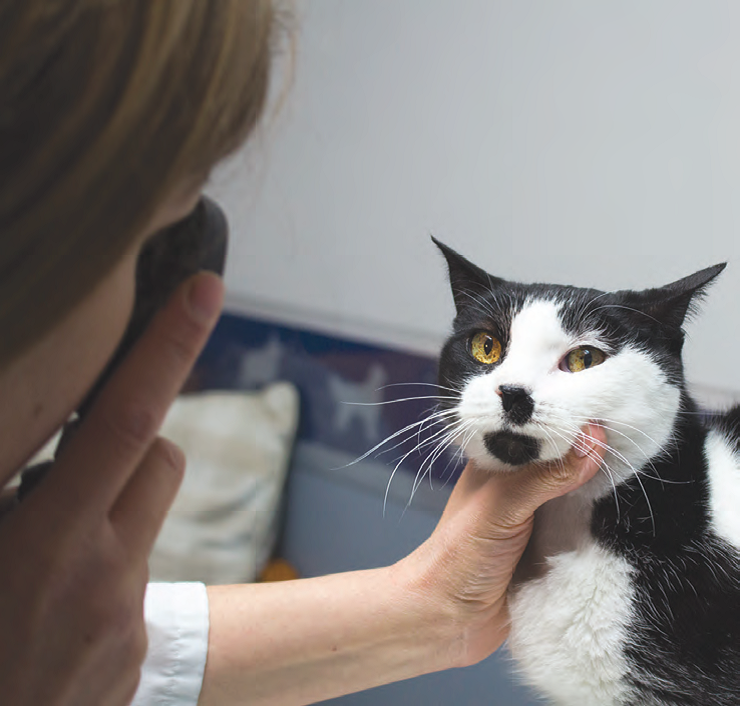 Dr. Jennifer Sletmoen, examines a cat for any issues at the Selkirk Animal Hospital on Monday afternoon. Sletmoen says pets require consistent monitoring, so that vets can catch any health problems early on.

Article published on February 27/2013 in the Selkirk Record:

Sweet tooth could make a dog’s day
National Cupcake Day hopes to satisfy your cravings and help furry friends
By Donna Maxwell
It seems like a silly question, but who doesn’t like cupcakes? And more to the point, who doesn’t like dogs and cats?  The sad answer to the second question is there are some who abandon pets and they end up in shelters and places like Winnipeg’s humane society. Money is always an issue for anyone who rescues animals and the folks at the Selkirk Animal Hospital are participating in National Cupcake Day Feb. 25 in the hopes of raising funds for shelters.

“We’re going to make a bunch of cupcakes and hopefully people will come down and make a donation,” says Rebecca Beaudoin, a registered animal health technologist at the hospital. “We’re gonna make doggie cupcakes too so they can bring their dogs and they can have a cupcake too.”  The event is new to Canada, but has been running in places like Australia, New Zealand and the United Kingdom for a number of years.  Anyone can participate by holding cupcake parties, like the Selkirk Animal Hospital is doing, or you can donate online at www.nationalcupcakeday.ca.

The Selkirk Animal Hospital has a team entered – they’re called Pawsitively Delicious – and you can search for them on the site and make a donation.  Staff at the hospital know a thing or two about saving animal friends who for whatever reason have found themselves out on their own – they have two pets that they rescued who now live full-time at the hospital. There’s Chevy, a black and white cat who’s lived at the hospital for about 10 years. She was brought in as a stray kitten to be euthanized, but the staff “fell in love and kept her”, Beaudoin said. And then there’s Twiggy, a 14-year old golden retriever who was rescued by staff two years ago. She showed up emaciated, cold and unable to stand due to malnutrition.  She had dental disease, areas of severe frostbite, arthritis and a mass on one eyelid. Further examination revealed she had diabetes, hypothyroidism and lyme disease. No owner came forward for Twiggy, but staff had also fallen in love with her, and made the decision to keep her as well.  She’s blind, but knows her away around the clinic quite well. “She’s just the best dog ever,” Beaudoin said.  “She’s kind of our inspiration.”

If you’d like to donate to the Pawsitively Delicious team you can do so online or drop by the Selkirk Animal Hospital on Mercy Street on Feb. 25 to enjoy a cupcake and donate there. 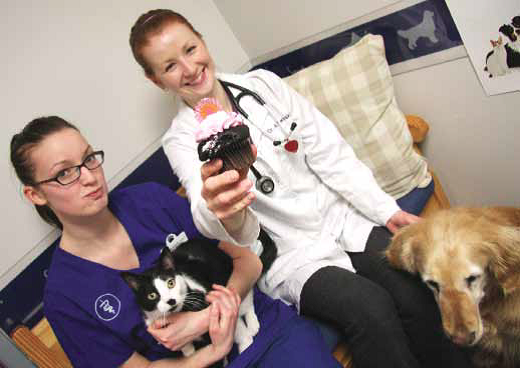 Selkirk Record photo by Donna Maxwell
Beaudoin, left, and Dr. Amanda Swirsky, show off the hospital’s pets, Chevy the cat and Twiggy a 14-year-old golden retriever. They’ll be giving out cupcakes, much like the one Swirsky has, on Feb. 25 when they try to raise funds for humane societys on National Cupcake Day.

Article published on March 7/2013 in the Selkirk Record:

Loving the hand that feeds 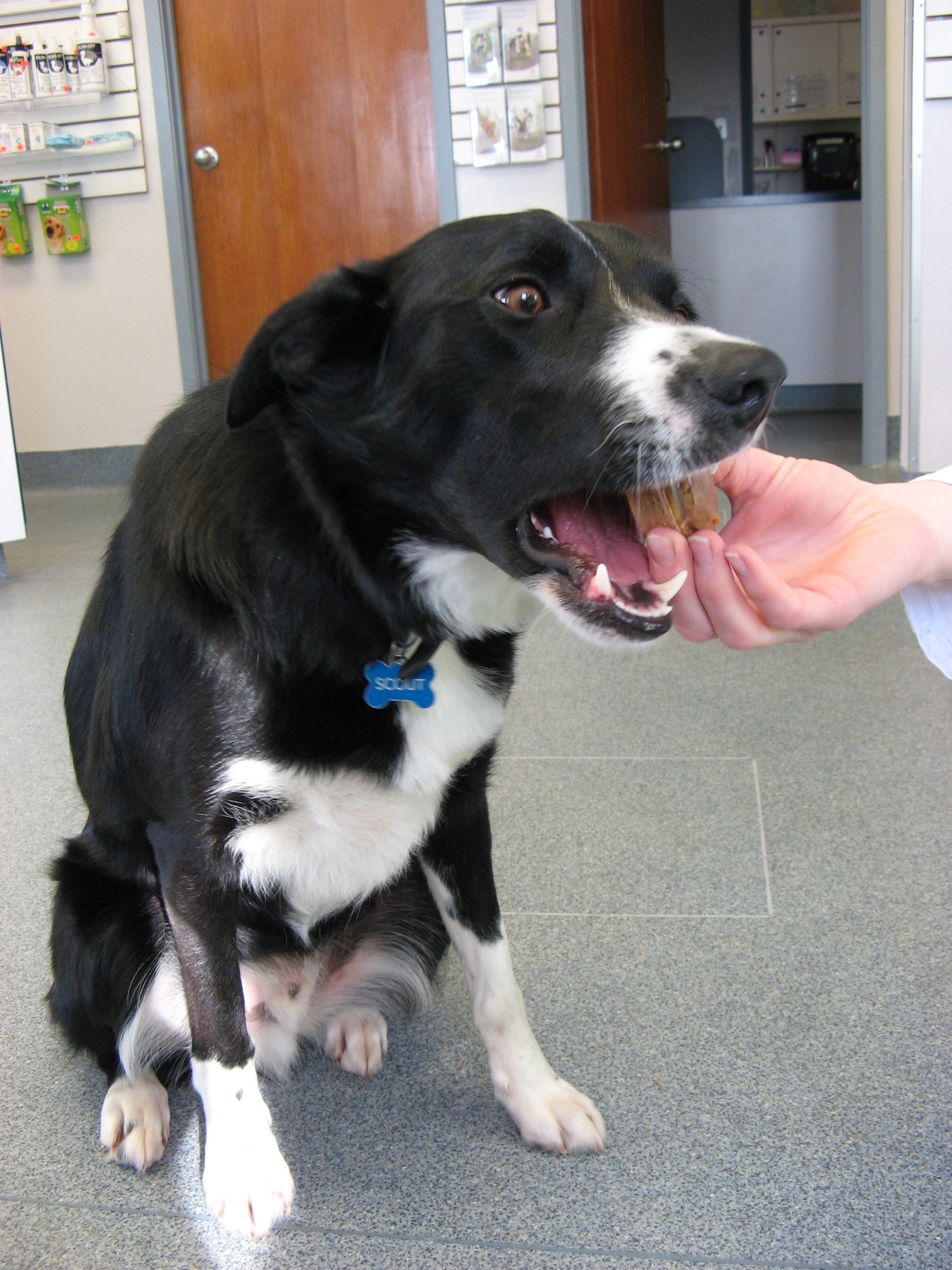 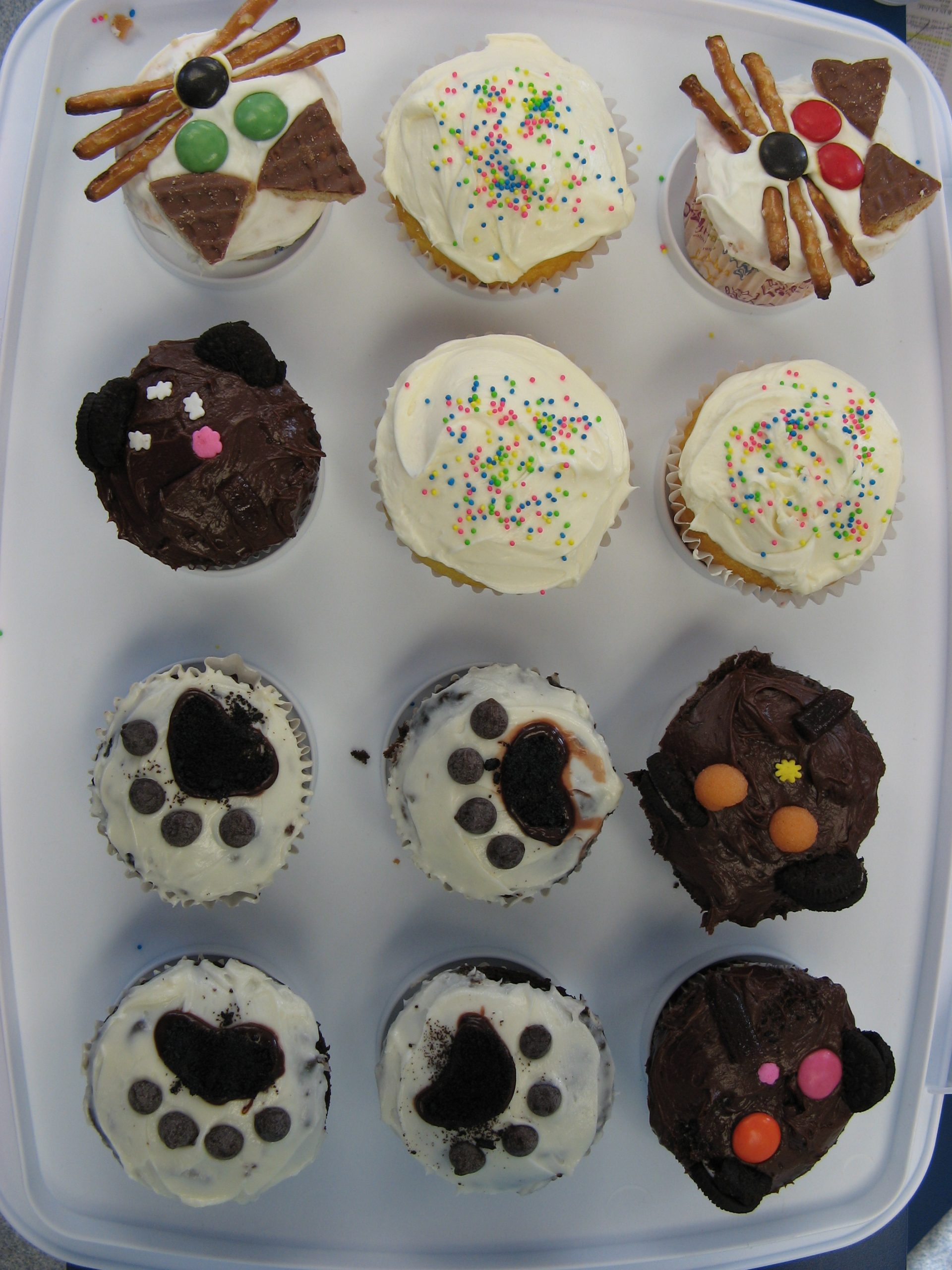 Scout takes sniff of a doggie cupcake at Selkirk Animal Hospital’s National Cupcake Day Feb. 25. Staff brought in super cute cupcakes, and some doggie ones too, and people and their pets came in to enjoy them and donate to shelters across Canada. They had hoped to raise $200 in their first effort but were glad to bring in $570. “We are incredibly grateful to have so many people in the area who are concerned about animal welfare and willing to support a great cause,” a staffer said. 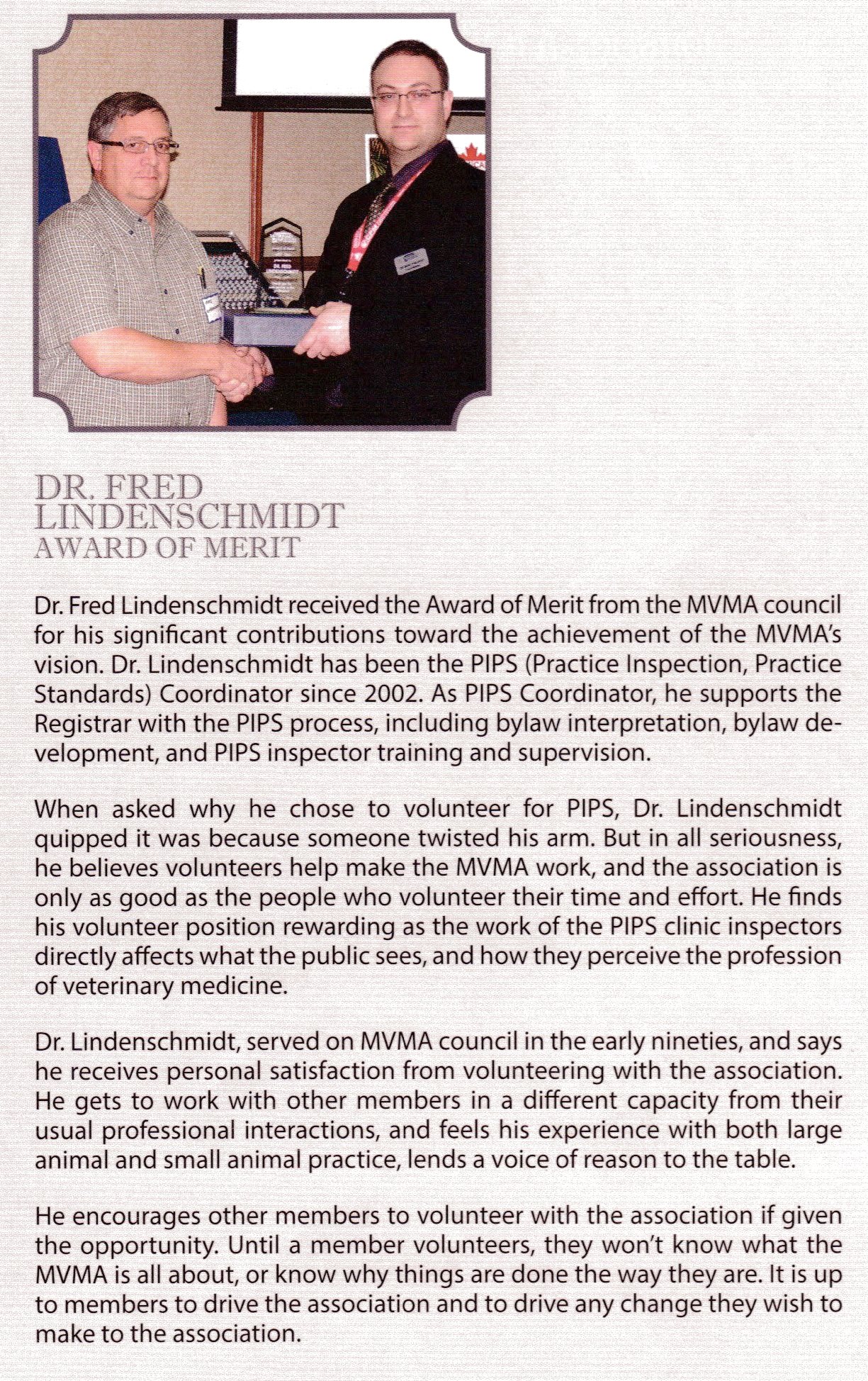 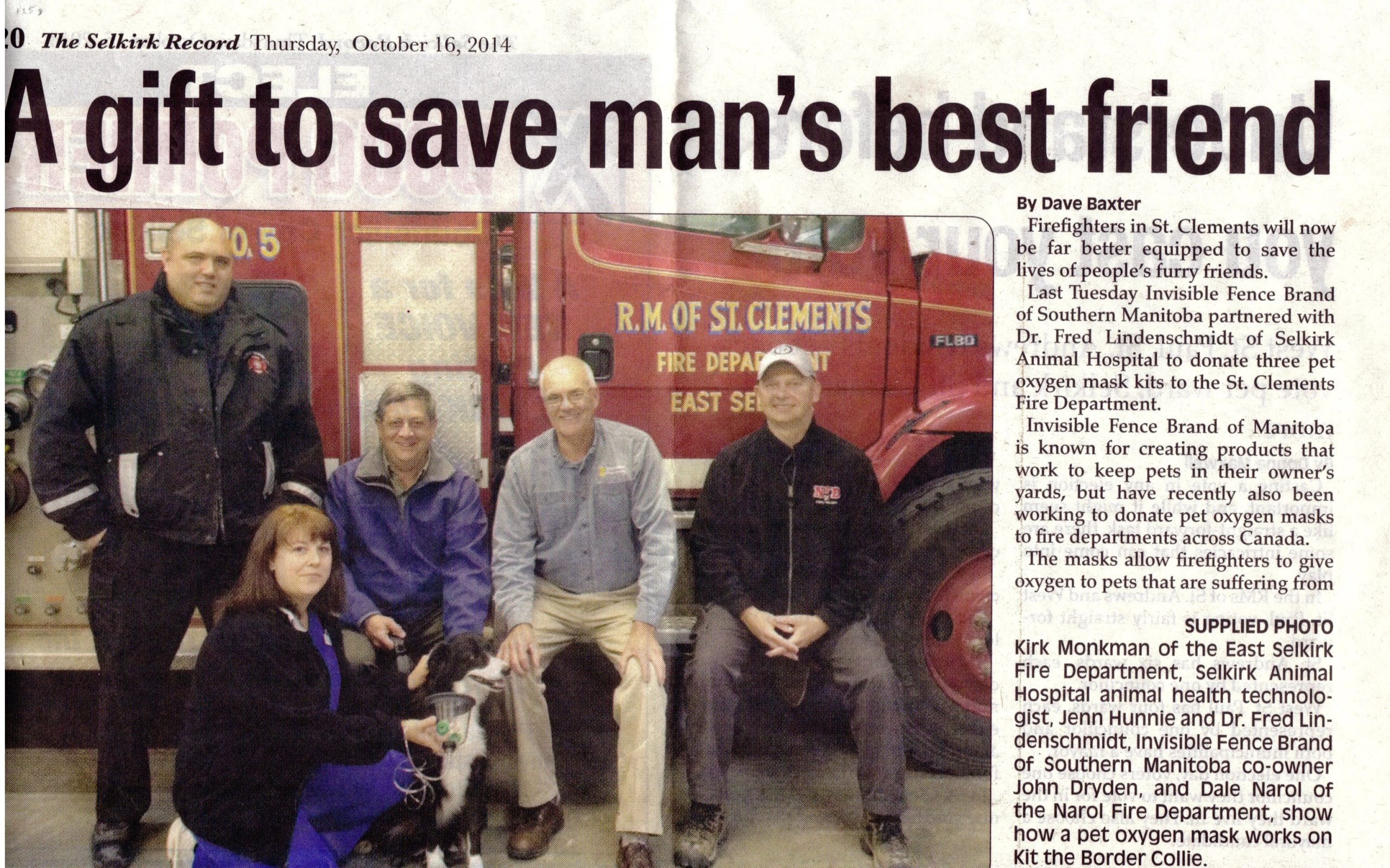 Contact Selkirk Animal Hospital to request an appointment or to request additional information about our services. We look forward to hearing from you.